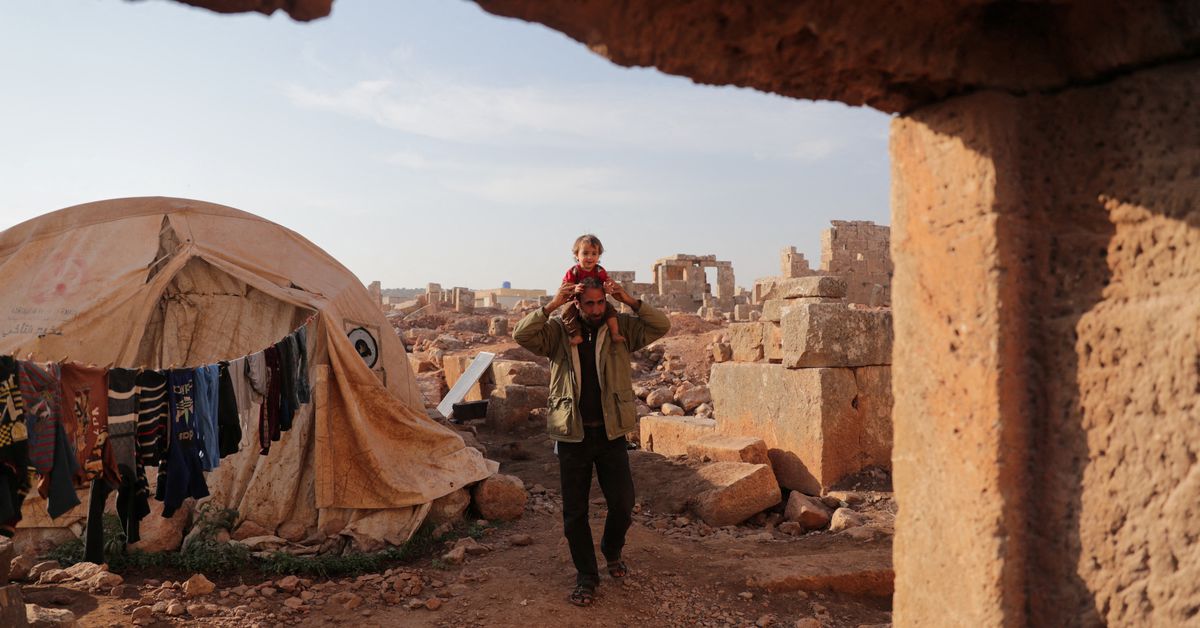 Othman and his family have been living in a tent amid ancient ruins in Sarjableh near the Turkish border since they fled for their lives around 2.5 years ago during a government offensive in the northwest from Syria.

(Open https://reut.rs/3e9upZn to see a photo report of the scene)

Register now for FREE and unlimited access to Reuters.com

Stones collected from the site are anchored in their tent, one of a few dozen housing families who fled their homes during the ten-year Syrian war.

Their clothes are drying on two ropes stretched between the tent and an ancient stone portico. Their children climb rocks and swing off walls in this unusual but dangerous playground.

“In the summer we face scorpions, snakes and dust, and all the pressures of life, and in winter the cold. The situation is desperate. There are no health services,” he said. said Othman, 30.

He said the shelling forced them to flee their village near Maarat al-Numan, an area close to the front line between the government and rebel forces that has been clubbed in various episodes of conflict over the decade. conflict in Syria.

A father of four, he struggles to earn an income, depending on seasonal jobs such as picking olives and any other work he can find. When there is no work, he is forced to go into debt to meet basic needs. Her children do not go to school.

â€œWhen the last bombing and the last attack started, we left to come here,â€ Othman said. “We couldn’t find a place to shelter, so we lived here among the ruins.”

The site, an early Christian settlement with ruins dating back to the 5th century, has been popular with the displaced as they don’t have to pay to stay there, unlike other areas where landowners charge rent.

â€œEveryone here had land that we cultivated and we had a livelihood in our villages and didn’t need anyone. But our fate was to be displaced,â€ Othman said.

Mohamad Othman, 30, carries his child on his head at the archaeological site of Sarjableh, in the countryside north of Idlib, Syria, on November 17, 2021. REUTERS / Khalil Ashawi / Files

“We did not leave our land of our own free will to come to an area that has been uninhabited for thousands of years.”

There are some 2.8 million internally displaced people in northwestern Syria, including 1.7 million in IDP sites, according to the United Nations.

Not far from Sarjableh, in another corner of Idlib province to the northwest, the former Babisqa site also shelters the bombed people from their homes.

In an earlier phase of the war, rebels used the site as a base, operating from ancient caves carved into the rock where cables installed by opposition fighters can still be seen.

Of the 80 or so families living on the site, it is known as the “Kharrab Camp”, or “Camp of the Ruins”.

Cattle ranchers, they took their sheep and goats with them when they fled to rebel-held areas in territory now under Syrian government control. Today, sheep and goats feed among ancient stones, poultry peck on the ground.

Some people have used stones from the ruins to build their shelters, some of which have small solar panels wedged outside. An antenna attached to the side of one of the houses provides internet.

Mahmoud Abu Khalifa, 35, father of seven, stores family goods and animal feed in an ancient cave carved into the rock. He keeps his sheep in an enclosure among the stones.

â€œBefore we were moved, we had farmland and crops and we lived off it and everything was fine and we had these animals,â€ he said.

Today, “children live in ruins and mud,” he said. “The situation is very desperate,” he said.

â€œOur only requirement is to return to our villages.

Register now for FREE and unlimited access to Reuters.com

An animal shelter is asking for a miracle this Christmas

Architects hired for the design of the Kiah and Wandella halls

Southern Charmers Pixie and Dixie light up in shelter